Bread, not gold: the wealth of chestnut trees

I just came back from a long spell wwoofing in Italy and southern France, and ended up spending quite a lot of time in places that had old chestnut orchards going back to the time when the peasant cultures in the uplands used the fruits as their staple food crop (the hill country not being suitable for grain cultivation). They ate them fresh, roasted, boiled, or made them into flour by drying them en masse in specialised buildings, then thrashing the skins off with sticks and grinding the nutmeat in mills. When harvests were good the best nuts would be taken to sell in lowland markets. The tree became known as ‘L’arbre à pain’ (literally ‘bread tree’) because of this massive contribution to the diets of the peasantry across France, Italy, Corsica and elsewhere. It also provided an invaluable back-up for when wheat harvests failed and thereby put the brakes on the famines that routinely struck European countries during the middle ages. Only a combination of disease, war, rural flight, the tanning industry and greater focus on silk (from the worms on mulberry trees, called ‘l’arbre d’or’ - ‘gold tree’) and subsequent dependence on the cash economy put an end to the cultures in the late 19th and early 20th centuries. Well, the subsistence village economies are gone, but individual farmers are still making use of the established orchards, keeping the trees and grounds maintained and selling the nuts at markets or higher end products in shops selling local/organic produce to middle-upper class consumers. But to my mind the possibilities are still there for rebuilding an indigenous subsistence culture - as long as the trees are kept alive.

Anyway, that’s a brief summary of what I learned. If you’ve got time to spare you can wade into the full report which I just posted here:

Bread, not gold: the wealth of chestnut trees

‘A dozen chestnut trees and as many goats are enough for a Corsican family not to starve. Secure in this regard, nothing can then persuade the Corsican father to work, except to buy a rifle.&…

Beautiful writing. Thanks for sharing! The old Appalachian economy looked similar. The demise of the chestnuts drove a lot of hill people into the coal mines where previously they could more easily make their living wages off the land. I’m patiently awaiting the arrival of widespread hypovirulence here in the eastern States. It is interesting: Castanea sativa, the European chestnut, also succumbs to chestnut blight (Cryphonectria parasitica). That is why we cannot grow them here, east of the Mississippi. That sativas succumb to blight, but seem unaffected in Europe has been the cause of much discussion. It turns out there is a hypovirulence virus in the family Hypoviridae, which parasitizes the chestnut blight fungus! As hypovirulence must spread naturally just as the blight, Europe had the time to develop their hypovirulent resistance. If we planted enough American chestnuts everywhere, regardless of their resistance, we can encourage the spread of hypovirulence, and with it the restoration of the American chestnut. Just think, all those ancient stools in our eastern forests, may one day grow up again it a hypovirulent world. Chestnut trees considered “dead” for over a hundred years may get another chance. Nature always finds a way to keep on giving…

Thanks Heyzach, didn’t know that about the Appalachians - do you mean white inhabitants or indigenous people, and are you aware of any overlap between the two? Were they subsisting directly off the fruits in the same way or was it mainly for export to outside markets? Also do you know if grafting came into the picture? The photos I’ve seen of american chestnuts seem to show wild trees bolting straight upright with massive trunks rather than the more ‘wobbly’ horizontal growths that grafted trees put out.

re: hypovirulence, yes I’d seen a few bits about that, an interesting topic. I saw someone make the point that the mass-felling of chestnuts in a north-south belt across the US (and Canada?), intended to stop the disease spreading to the western part of the continent, might have killed off the individual trees that were capable of developing this resistance and gradually rebuilding the population with newer diseases-resistant varieties as apparently happened in Europe. Best laid plans, eh?

Would be interested to hear more about the cultural history of chestnuts in the US, pre- and post-conquest, if you feel like sharing

By Appalachian people I meant the (mostly) white people who settled in the hills. For them it was a staple of their economy, finishing their hogs, and allowing them to make a reliable but modest living every fall/winter exporting the nuts to urban centers, or even local sale. People were known to roast chestnuts along the side of the road and sell them to passersby. Songs with lines like “chestnuts roasting on an open fire” became cultural mainstays. The chestnut was probably so venerated by Americans because it already had a traditional culture built around it in Europe. The chestnut is also really conducive to a farming people because it fruits so reliably and consistently, like a major crop. By contrast black walnuts are hard to process on a mass scale, hickories are usually biennial, oaks have mast years, etc.

From what I can gather from anthropology, archaeology, and pre-colonial ecology, the chestnut, although used by indigenous peoples, was far less important than hickories, walnuts, oaks, and even hazelnuts. One reason this may have been so is that chestnuts have almost no fat content, being entirely carbohydrate, unlike black walnuts and butternuts which are upwards of 60% fat, hickories which are 60% fat, hazels which are also 60%. Red oaks and black oaks are about 16% fat and white oaks are 1-6% fat.

Early explorer accounts of unsettled, tribal areas in the eastern piedmont and parts of the Applachian mountains dsscribed vast savanna grassland areas filled with deer, elk, and even bison in some regions. The forest patches were 90% white oak according to some, and definitely above 25% conservatively estimated. Hickories made up the other bulk portion of the forest, such that oak-hickory was the ecological description of these forests. The upland forests, at least, were fire adapted and so there is no reason why chestnut wouldn’t have fared well, seeing it is a fire-tolerant species. But it doesn’t really enter the scene in a major way until after the indigenous people are forced to leave, and their savannas and “Barrens” grow up into “sapling lands” and then timber. Those early pictures of seemingly ancient chestnut forests show an ecology which is probably emerged after fire suppression. This is because the chestnut trees are so close together. If fire had been a regular occurrence, they’d be more widely-spaced, in an open forest. In other words, there may have been a huge peri-colonial boom in chestnut growth, later stopped by the blight.

Another factor reducing the important of the chestnut for native peoples is that it is a species generally intolerant of rich, circumneutral soils, and those nutrient rich areas are precisely where indigenous settlements and camps would have been. Hickories, walnuts, and white oaks on the other hand thrive in rich soils, near floodplains, loamy valleys, and other alluvial areas… precisely where they’d be in closest proximity to people. Chestnuts were mainly on dry, upland, nutrient poor, and acidic mountain ridges.

Wow, thanks for that, very informative!

‘The chestnut was probably so venerated by Americans because it already had a traditional culture built around it in Europe’ - interesting. I see the first settlers were mainly from the british isles (scots-irish & people from the anglo-scottish border) and germany, with some french areas to the north, so if there was a direct import of chestnut traditions I guess it would have been from the french, as chestnut trees mainly get used for timber in the UK. Or they just adapted to what was there maybe… They remained farmers first and foremost, though? That’s what I meant by asking if there was direct subsistence on the nuts. In Europe the chestnut areas were in upland regions unsuitable to most forms of agriculture so the nuts were the main staple; I was wondering if tree crop subsistence played a similar role for settlers in the more remote mountainous areas of the Appalachians?

‘the chestnut, although used by indigenous peoples, was far less important than hickories, walnuts, oaks, and even hazelnuts.’ - okay, thanks for filling in the detail on that. I’d heard they played a component in fire-managed forests (along with unspecified oak and hickory) and were purposefully grown in orchards outside villages in the ‘eastern usa’, but the sources provided for this are from the 1950s so there might be more up-to-date research, or it might not apply to the appalachians specifically - see the Abrams paper here: https://sci-hub.tw/https://doi.org/10.1177/0959683608095581 (p.1132) That oak and hickory would be favoured over chestnut for their greater fat content makes sense to me as I’d heard that california tribes ‘based their acorn preference on oil content, storability, and flavor rather than sweetness’ (although this doesn’t fit with notions of the ‘forager’s dilemma’ where carbs are viewed as the holy grail). Also the soil conditions you describe sound about right, as those poor, acidic upland soils are the usual spots for chestnuts in Europe too. The theory that chestnuts gained ground over the other species after discontinued native management also makes sense. That photo I used doesn’t seem like the product of deliberate planting, certainly: 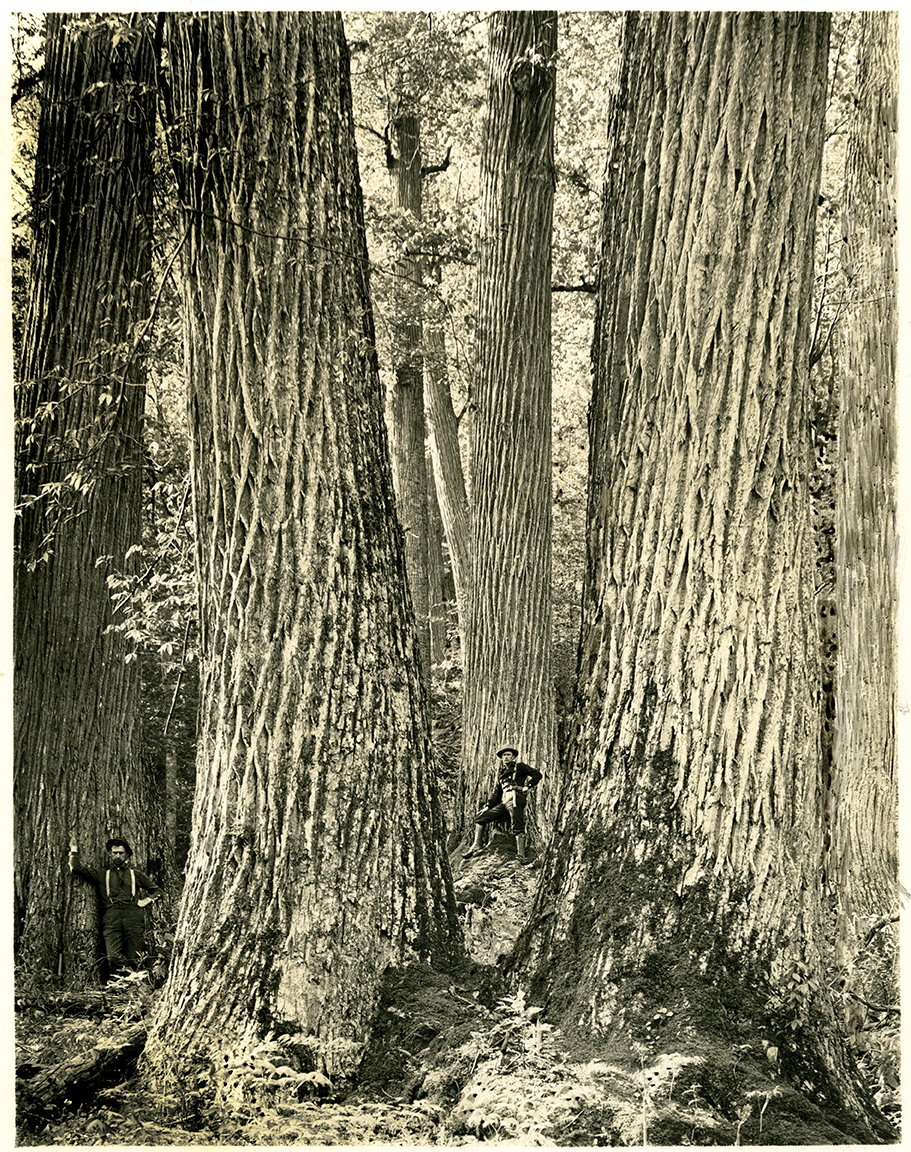