Anthropology: Hand of the gods in human civilization

http://rdcu.be/gmBqAnthropology: Hand of the gods in human civilization

Oops! sorry - let me see if i can get a link without the sign up stuff

That still doesn’t work, at least for me…definitely a promising title though!

“Please provide your Chapman or Brandman credentials to continue to this resource.”

aargh! sorry! here’s a link to an article about the paper: https://www.sciencenews.org/article/rise-human-civilization-tied-belief-punitive-gods (not sure why my links aren’t working… i guess there’s no way to upload a pdf here?)

Reading the article it sounds interesting, I’d be curious to look at the full paper. To me it comes down to the question of which came first, the “punitive Gods” or the agricultural society that created those Gods? Were the Gods a manifestation of larger cultural forces or were they used by the rulers as a form of coercive power over the lower classes? It does seem like Gods reflect (or are a product of) fundamental cultural values. Modern society and it’s monotheistic religions seem to be more separating than unifying, some all-powerful, distant deity rather than certain cultures with animist beliefs such as some members of the Haida people of the northern coast of so-called British Columbia. It would be great I think to look into the evolution of belief systems in areas where civilization emerged and see how far changes in spirituality can be traced back. 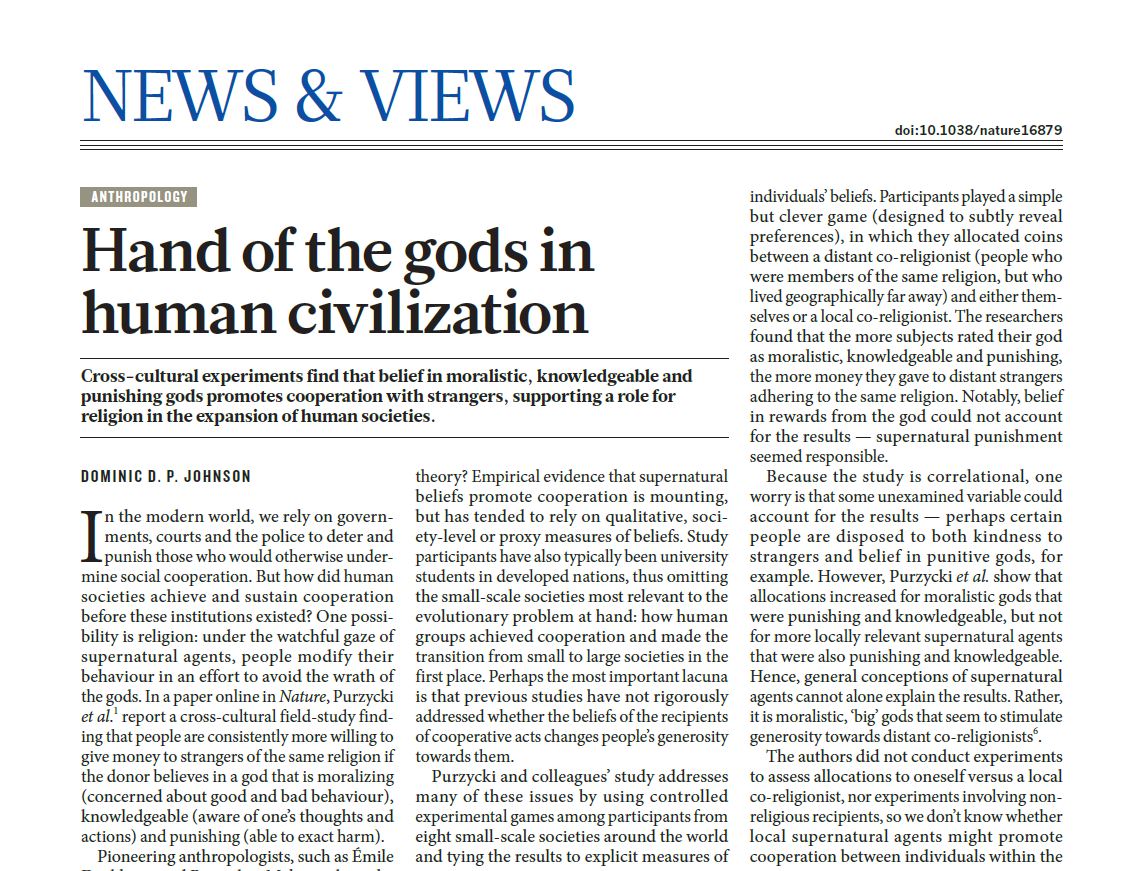 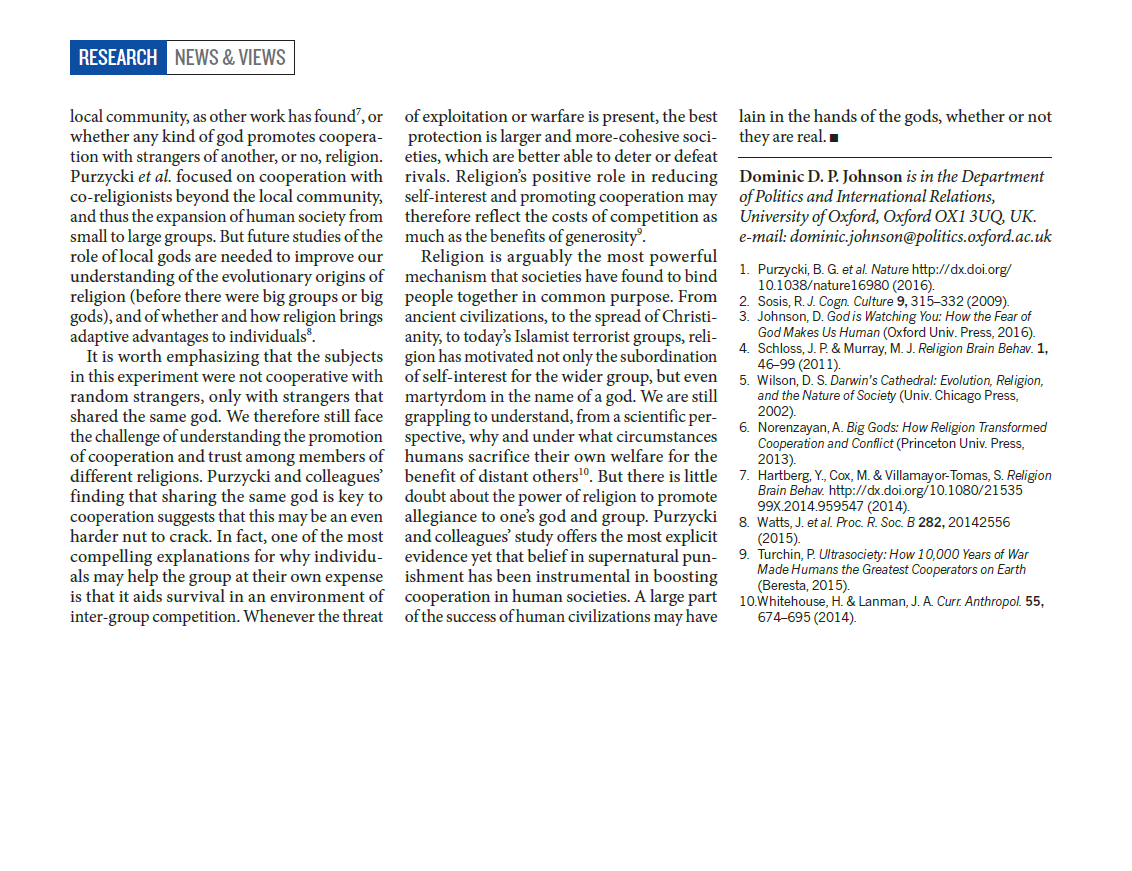 New archaeology from the Gobekli Tepe site in Turkey is adding evidence to the idea of religion preceeding civilization and agriculture. The site at Gobekli Tepe dates back to at least 11,600 years before the present, and it is megalithic architecture similar to stonehenge. There are depictions of wild animals all over the temple walls, and two looming anthropomorphic stone-block figures in the center lording over or judging the proceedings in the inner chamber. While remains of the wild rye and wheat predecessors have been found in the area, there is no evidence that these had been domesticated by this point in time, and there are no storage chambers, and no domiciles. Most researchers consider the site pre-agricultural. The numerous wild animal carvings and animal bones from beings such as foxes, and the lack of any depictions of wheat, lend credence to the pre-agricultural idea.

So what was Gobekli Tepe? What was it used for? The standard opinion these days is that it was one of the first temples for worship. But, I see darker happenings here. Among the finds of the dig, are numerous skeletons buried in mass graves. All buried individuals are unrelated so these are not family burial mounds. The skulls were removed from the bodies and kept in a separate area. At least one of the skulls had the remains of blood upon it. Now, one conclusion is that this was simply an ancient burial ground and the removal of the skull was perhaps a form of ancestor worship. However, the possibility that this was a scene of human sacrifice cannot be ruled out.

If we look around the world, we see the same human sacrifice practices, almost following the exact same form too. The Aztec were reknown for the murder of people within their temples, and they removed the heads of the victims and stored the skulls on a rack in a separate chamber. Coincidence? Hmmm. The Aztec human sacrifice rituals have evidence linking their origins back to ancient Peru. The Chinese also engaged in human sacrifice. So we have three centers of civilization – China, the near-east, and Peru – and each of these centers show some evidence of human sacrifice.

In the context of Gobekli Tepe, is human sacrifice what “temple” means? I shudder! But whether human sacrifice was performed or not – it debateable – the archaeological evidence sure is suggestive that in Gobekli Tepe by 11,600 years before the present, an idea existed within humans which held to superiority over the animals, and that among the humans, some had begun to distinguish themselves above the other humans and form into a priestly class. Such egocentric thinking, I think we’d all agree, is a hallmark of civilized psychology.

Gobekli Tepe was later intentionally buried, perhaps so that it be forgotten forever. But offshoots of its temple death-cult show up elsewhere. Catal Huyuk, another ancient site, is about 600 miles away from Gobekli Tepe and flourished 4,000 years later. But whereas Gobekli Tepe was merely a temple and had no domiciles or granaries, Catal Huyuk is a city covered with dwellings and store-houses. Wheat and rye and cows are domesticated at this point and the society is decidedly agricultural. And within the city are the remains of an inner temple built to the same specifications as the one at Gobekli Tepe, but smaller. There are in fact multiples of them, spread far and wide, almost decentralized. It seems the cult had grown and produced offshoots.

Was these still places of human sacrifice? Were these death-cults? I don’t know for certain, but my opinion is “yes.” While human sacrifice may have become less prominent as the millennia marched by, the temple remained a death cult. As evidence, I offer the parallels of other temples descended culturally from the near-east. For example, we can see continuing traces of the motif in the Eleusinian mysteries of ancient Greece centered around Demeter who confers the gift of wheat, and the death of her daughter Persephone who bears the elements of a sacrificial person and goes down to the underworld, Hades. The ancients were obsessed with their own mortality and always trying to overcome it or side-stwp it. Interestingly, Socrates refused to participate in the mysteries of Eleusis. He held skepticism to the truth of its oracle and he taunted the rich and other rulers of the land for their misdirections and follies. His refusal to become an initiate in the cult of Eleusis is probably why he was killed.

Still today, our major religions springing from the near-east are death cults. Christianity, despite what Jesus actually said and taught, somehow has become all about his gruesome death, the weight of sins, and hopes for an afterlife beyond this world. It is a modern example of the death cult with its sacrificial victim yet somehow salvific figure. Interestingly, too, a reading of old religious scriptures such as the Bible reveals tales of human sacrifice. Remember the angels that came to Abraham telling him to sacrifice his son Isaac upon an altar? Perhaps it was dark origins of human sacrifice such as these which began the process of human domestication, even before agriculture. Once humans begin becoming domesticated (which is a process that could unfold in as little as ten generations through breeding selection), agriculture becomes possible, or even, necessary? I leave it as an open-ended question, as I don’t know!

But, leave the death cult! Celebrate life by giving to life where there is life, strengthening, growing…

New archaeology from the Gobekli Tepe site in Turkey is adding evidence to the idea of religion preceeding civilization and agriculture.

hi! do you have any links to resources you could share here? thanks

Hello Tracie! Yes, I have found some links to share.

But first I need to point out that I made a factual mistake in my post about Gobekli Tepe. The skull room was actually found at a different archaeological site, Cayonu Tepesi, which is not far away from Gobekli Tepe but is at least a thousand years closer to present. One crucial difference between Gobekli Tepe and Cayonu Tepesi is that Cayonu was agricultural, due to evidence of einkorn wheat cultivation, storehouses, and dwellings. But aside from these differences, there is good reason to believe both Gobekli and Cayonu had a lot of cultural similarities and continuities. It was at the Cayonu Tepesi site where many skulls were found under a bit stone slab with a large flint knife, thus seeming much-like a sacrificial altar, and it is this stone slab which has been tested to contain traces of human blood. If human sacrifice was NOT performed here, then human bodies were certainly cut up and processed here as part of some other kind of ritual anyhow (perhaps as a burial rite). If we delve into Mesopotamian-Sumerian mythology a bit, we find that their gods were believed to live up on a mountaintop, and they called this place Ekur (https://en.wikipedia.org/wiki/Ekur). Ekur bears many similarities to Gobekli Tepe, as the German archaeologist and excavation leader Klaus Schmidt has highlighted. And we know from the Sumerian mythology that human sacrifice was demanded by the gods at Ekur from time to time. But be careful, Sumerian mythology is a real rabbit-hole, and there’s a lot of New Age and conspiracy and alien stuff out there which I try to steer clear of! So I’ll just leave it at that… read what Klaus Schmidt had to say about his findings at Gobekli Tepe, and do your own research.
Anyhow, the links…

Charles C. Mann, author of 1491, wrote an article at National Geographic about Gobekli Tepe and the origins of religion: http://ngm.nationalgeographic.com/2011/06/gobekli-tepe/mann-text

Here’s an incidentally pro-Armenian anthropology blog which reproduces some various articles about the discovery and findings of Gobekli Tepe: http://arevordi.blogspot.com/2009/01/significance-of-urartian-era-musasir.html

And I found a documentary that was made about Gobekli Tepe which goes into detail about some of the symbolism and reveals quite a bit. http://gobeklitepe.info/worldsfirsttemple-com-the-movie-on-gobeklitepe.html

I have a lot to think about regarding this topic. I’m going to have to research much more before I’m satisfied.